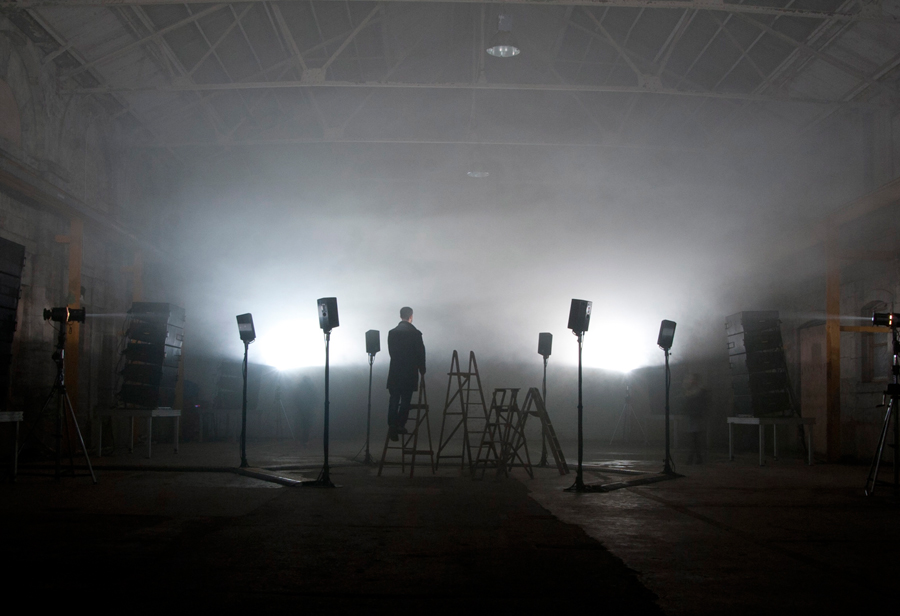 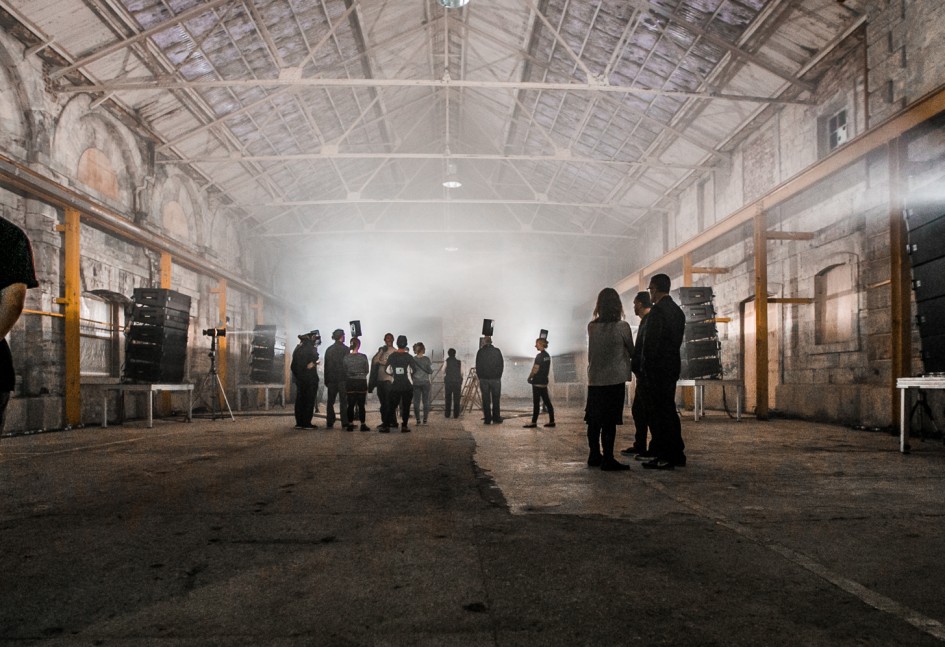 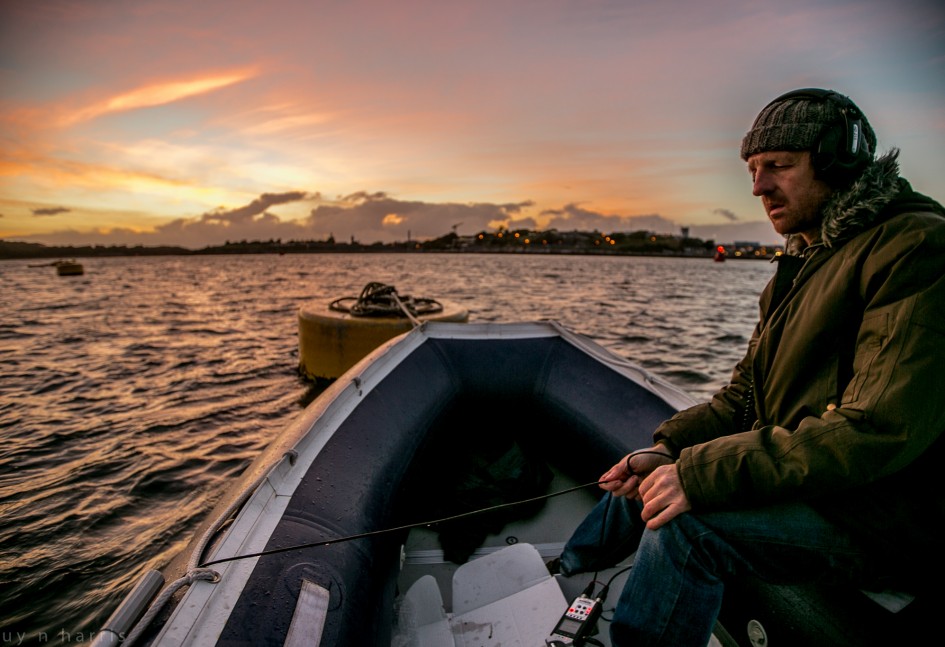 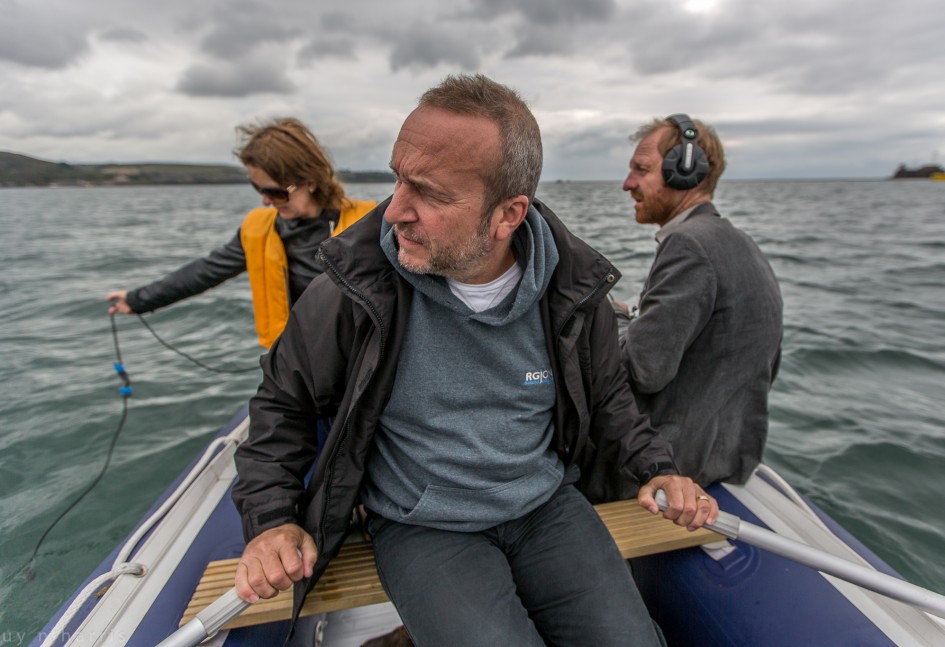 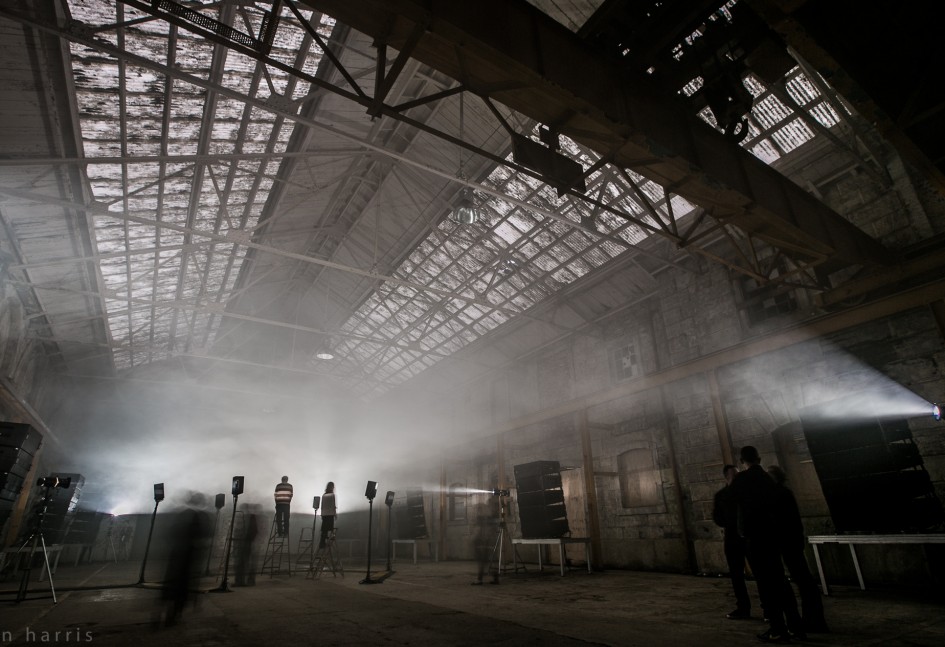 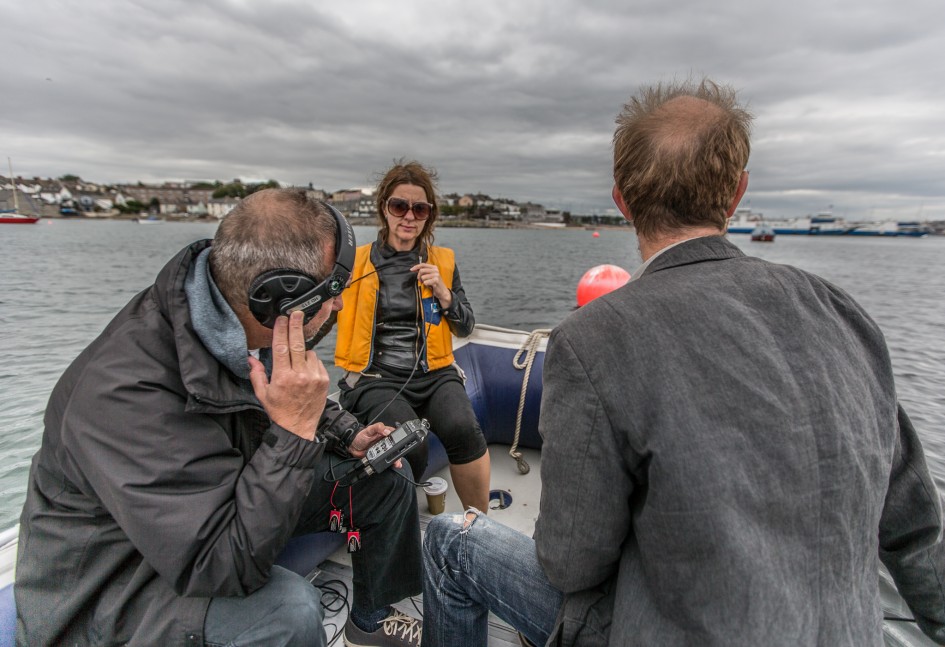 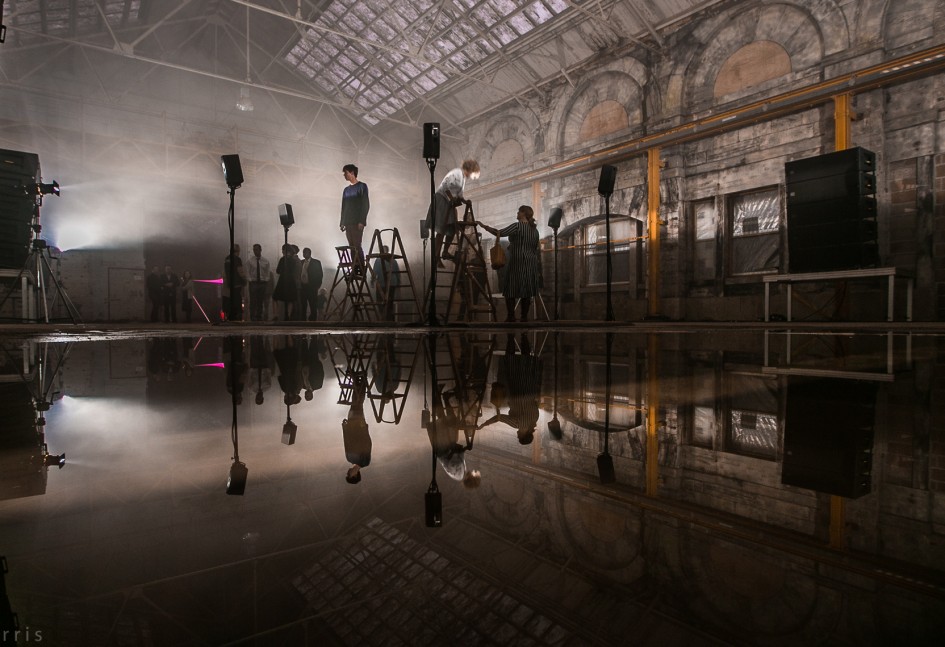 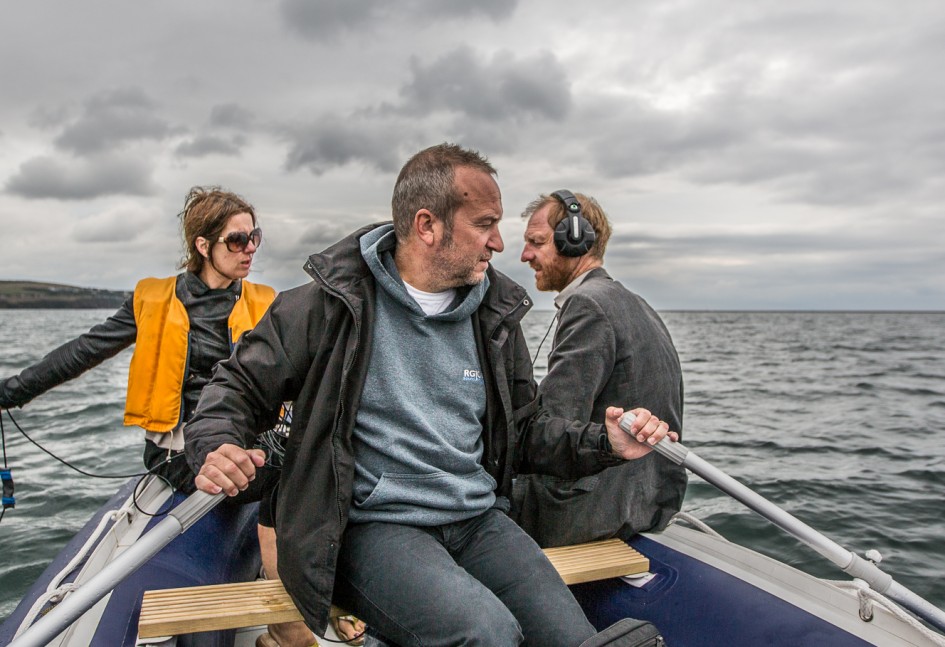 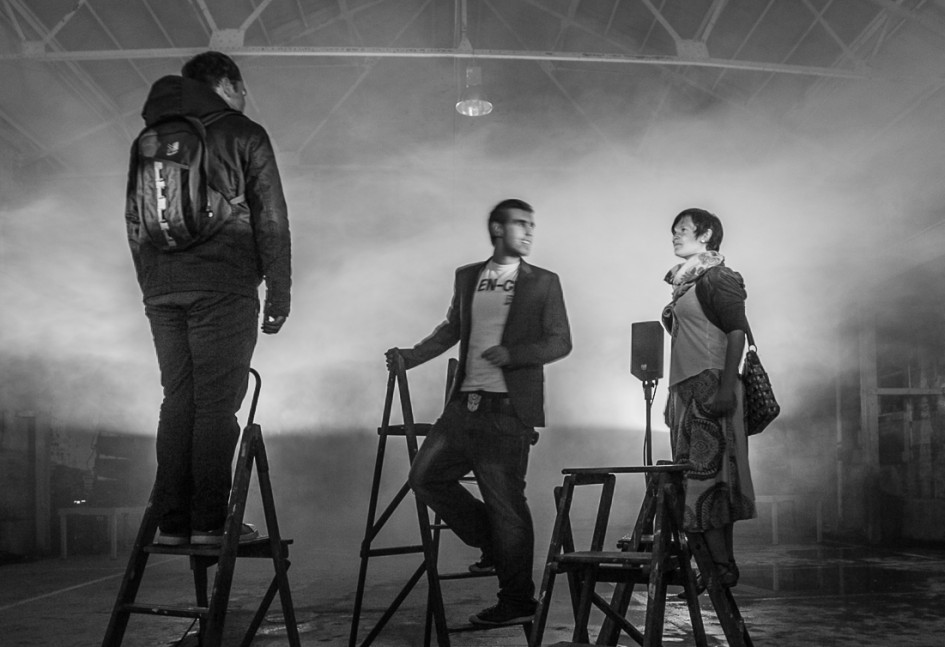 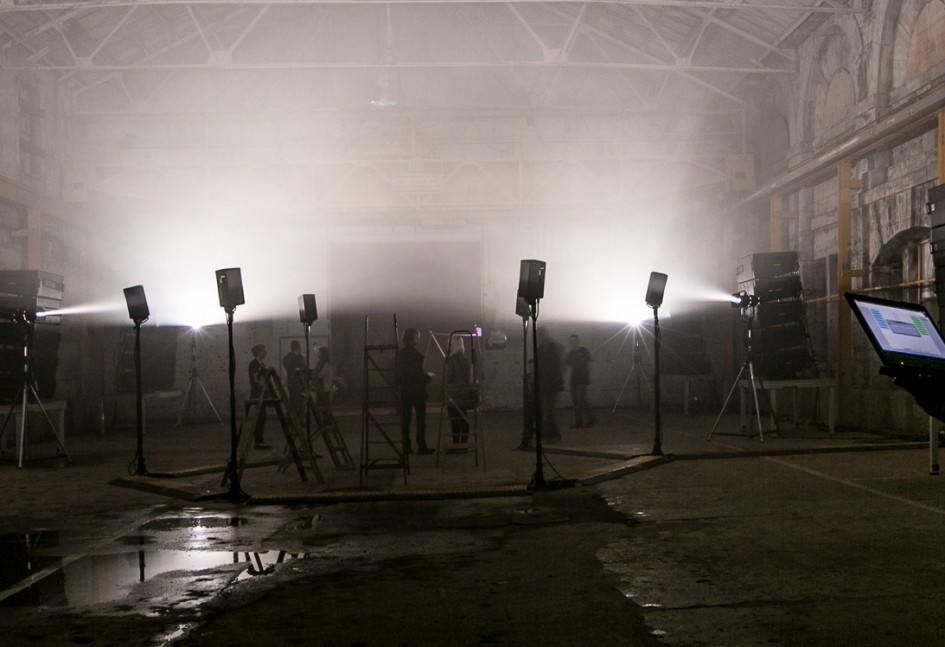 About the Artist – John Matthias

The Fathom sound installation created a sonic surface, 6ft above the floor of the Factory Cooperage Building in Royal William Yard; a former Royal Navy victualling yard at the mouth of the River Tamar, 21 – 22 September 2013. It was commissioned by the River Tamar Project as part of the Plymouth Ocean City Festival and was featured on Nick Luscombe’s BBC 3 radio show Late Junctions in November 2013. The film of Fathom is was featured in the It Sounds Like Art exhibition at the Kasa Galeri, Istanbul, Turkey, 2 – 26 April 2014.

On entering the building, visitors were immersed in an underwater sound-environment where the minute fluctuations of the sea are heard as they moved around the space. These fluctuations were marked by waves of live and recorded sound moving across the building triggered by environmental events, the tides in confluence with the Tamar Estuary.

These fluctuations and sound events included the massive change of vibration of the cross-channel ferries as they manoeuvred into Mill Bay, the smaller sonic events of the many other vessels that use the estuary, set against the fascinating soundscape of the tidal estuary. All of these events made up an underwater sonic representation of the Tamar Estuary and Plymouth Sound.

Above the fathom, over the 6ft surface of water, airborne atmospheric sounds were just detectable, drawn from birds and human-made sounds. Those who wished to elevate themselves above the surface were able to stand on small steps lifting their head above the ‘fathom’, above the watery sonic surface and into the volume of ‘air’.

The sonic boundary between air and water was created using cutting edge technology in an unusual way.  The sound system used Multi-cellular Array™ technology to generate a very precise sound field, through the manipulation of phase, amplitude and equalisation. The system is more often used for localising sound at large-scale events, such as the recent concerts in London’s Hyde Park, where the audience experience has to be delivered with minimal disturbance to local residents.  It is the only one of its kind, and is at the absolute forefront of modern professional audio.

Sound is thought of as pervasive, it is everywhere and unlike vision we cannot turn away from it. Fathom shifts our perception of this phenomenon, creating a vast but specific volume of sound, with a definite but mutable boundary that differentiates the world of water from our world of air.

Jane Grant and John Matthias have collaborated on numerous works including ‘The Fragmented Orchestra’ in 2008 with Nick Ryan. They received the PRS Foundation New Music Award for this ambitious sound work that simultaneously took place at 23 sites in the UK.

Both Jane and John have established international profiles and produced work with major institutions and groups such as the British Film Institute, the Pompidou Centre, and the Rambert Dance Company Jane Grant is currently working on a major new film installation about the interface of the earth and sun and John Matthias has scored a new contemporary dance work with Andrew Prior and Company Chameleon which has its London Premier at the Royal Opera House in November. They are both Associate Professors at Plymouth University and co-directors of the research group Art and Sound in the School of Art and Media.

About the Artist – John Matthias